Just like when we have an on premise model for our infrastructure, we also need a network for our cloud infrastructure either public or private. Yes, we can build secure and isolated private network. If you have a plan to use AWS resources, let's say you want to host your servers using EC2 instances. Then, you can create your own network for them or on AWS it's called as Virtual Private Cloud (VPC) instead of using the default one.

Amazon Virtual Private Cloud is a networking service as provided by AWS to create , manage , isolate the environments and services over the cloud. In layman term its a virtual data-center over the cloud which gives you all the super powers to setup /create own subnets, IP range , configuration of route tables , network gateways and network firewall(access rules / via security groups and network ACL’s).

Below is sample and a very basic AWS VPC architecture with a public subnet and a private subnet. If you are planning to run a public-facing web application with back-end servers that are not publicly accessible – for example a multi-tier website – this template would be ideal to communicate your application design. Click the image to make the necessary changes online. 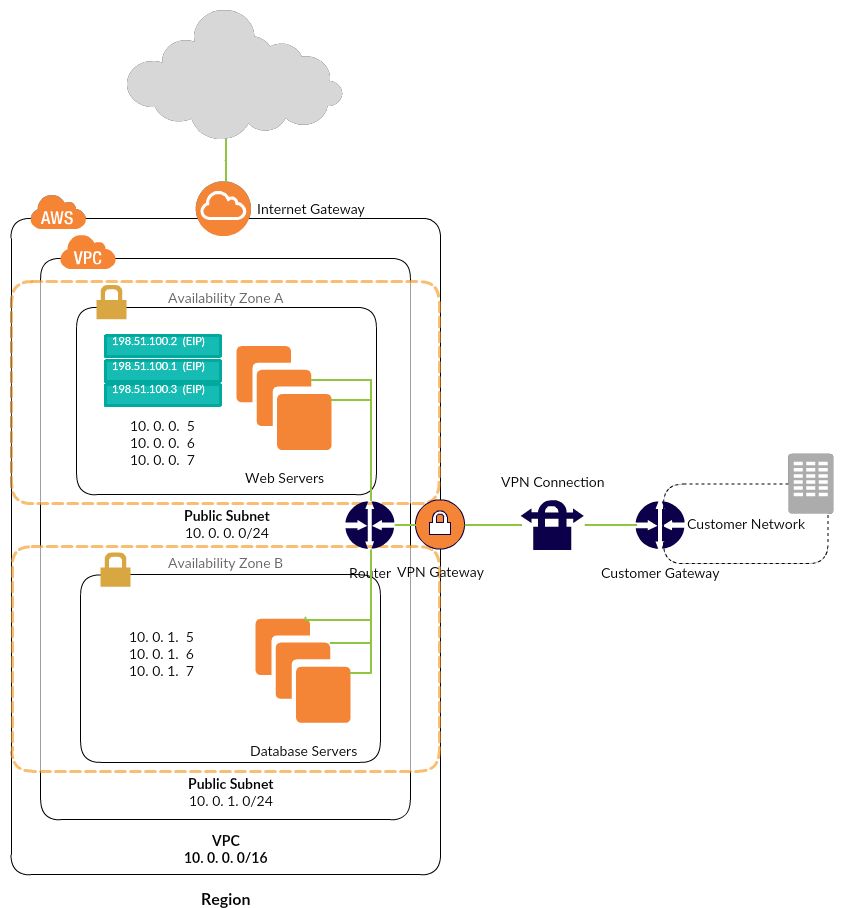 ❓ Why should I use Amazon VPC?

Amazon VPC enables you to build a virtual network in the AWS cloud - no VPNs, hardware, or physical datacenters required. You can define your own network space, and control how your network and the Amazon EC2 resources inside your network are exposed to the Internet. You can also leverage the enhanced security options in Amazon VPC to provide more granular access to and from the Amazon EC2 instances in your virtual network.

A subnet is a range of IP addresses in your VPC. You can launch AWS resources, such as EC2 instances,into a specific subnet. When you create a subnet, you specify the IPv4 CIDR block for the subnet, which is a subset of the VPC CIDR block. Each subnet must reside entirely within one Availability Zone and cannot span zones. By launching instances in separate Availability Zones, you can protect your applications from the failure of a single zone.

Example, A website hosted on an EC2 instance hosted in a Public Subnet (routes to the internet) connected to a Database instance in a Private Subnet (no direct access to the internet). This grouping of partitions in your AZ is extremely useful and you can also determine the subnet size by using CIDR block notation (e.g. /28 = 16 IP Addresses).

It essentially facilitates traffic in and out of a softwaredefined network. This traffic needs to know where to go, and this is achieved via route tables. A route table in VPC has rules or routes defined for the flow of traffic. Every VPC has a default route table that is known as the main route table. You can modify this main route table and you can create additional route tables.

Each subnet in VPC is associated with only one route table, however, one route table can be attached to multiple subnets. You use route tables to decide what data stays inside of VPC and what data should go outside of VPC, and that is where it plays a very important part in deciding data flow for a VPC.

An Internet Gateway is how your VPC accesses the internet. Internet gateway allows communication between resources such as EC2 and RDS instances in your VPC and the Internet. It is highly available, redundant, and horizontally scalable; that is, you do not need to attach more than one internet gateway to your VPC in order to support an increase in traffic.

If a VPC does not have an Internet Gateway, then the resources in the VPC cannot be accessed from the Internet. It allows resources within your VPC to access the internet, and vice versa.

AWS recommends a NAT gateway over a NAT instance as it is a managed service that requires little or no administration, is highly available, and highly scalable.

A Virtual Private Gateway (VGW) is nothing but a VPN connector on the AWS side of the Site-to-Site VPN connection. It is a managed gateway endpoint for your VPC responsible for hybrid IT connectivity using VPN.

A VPC peering connection is a networking connection between two VPCs that enables routing using each VPC’s private IP addresses as if they were in the same network. This is the AWS recommended method for connecting VPCs.VPC peering connections can be created between your own VPCs or with a VPC in another AWS account. VPC peering also supports inter-region peering. Traffic using inter-region VPC Peering always stays on the global AWS backbone and never traverses the public internet, thereby reducing threat vectors, such as common exploits and DDoS attacks.

A VPC endpoints is a secure way to communicate with other AWS services without using the internet, Direct Connect, VPN Connection, or a NAT device. This communication happens within the Amazon network internally so your traffic never goes out of Amazon network. At present, endpoints are supported only for Simple Storage Service (S3). These endpoints are virtual devices supporting IPv4-only traffic.

Looking forward to joining in Scaler as a Content Writing.